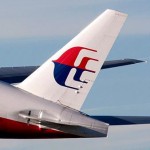 So the official Malaysian government’s story is out and it’s disgraceful the way international media is now aligning itself with what seems like a shoddy, half-baked (make that uncooked) cover-up. I am by no means an NTSB expert, but that’s the point, watch me poke holes in their kindergarten cover-up!

I’m afraid without the media probing for more information, more closure, the entire episode is doomed.

A Boeing 777-200 is big, its huge! Depending on its configuration, it is capable of being a long haul jetliner that can carry close to 350 passengers in certain configurations. The 777-200 variant has a maximum takeoff weight of 545 thousand pounds, thats about 247 tonnes. Dear ‘Malaysian airplane search people’, when a Boeing 777-200 hits water at terminal velocity, the damn thing breaks into tens of thousands of little pieces. Many of these pieces can float, like seat cushions, life jackets, sealed compartments filled with air. Sooner or later, this floating debris will make its way to shores, and we all know there isn’t a dearth of shores where this bird supposedly went down. For God’s sake, Diego Garcia which is an American Naval installation, south of the Maldives, is spitting distance away from where these guys said 370 went down. What do they think we are, kids?

OK, let’s believe for a moment that the magical debris and the even more magical ocean currents do not hit land. This is the Strait of Malacca we are talking about! It’s one of the most populated maritime regions with literally thousands of merchant marine ships in the vicinity all day long, all year round! Once again, what do they think we are, kids?

Next, every Boeing aircraft constantly sends information back to Boeing through its FMC (Flight Computer) for the company to monitor the aircraft’s vital parameters. Guess what? If numbers are to be believed, this aircraft continued to transmit information to Boeing for at least 4 hours after it crashed. Please be advised, it is possible that a hijacker is trained well enough to switch off a transponder, have you ever considered the fact that they probably overlooked the Boeing transmitter which in all probability is a satellite uplink? Or that it is an inherent feature of the aircraft that cannot really be turned off short of switching off master avionics making it impossible to navigate.
Absurd claim 2: Pilot Suicide

Most aircrafts have something called a transponder. Its a small device that forms part of a system called Secondary Surveillance Radar or SSR. It tells ground controllers where an aircraft is, how high it is, how fast its going, where its headed, the works! The transponder on Malaysia 370 was switched off long before it went down. Why on earth would a pilot on a suicide mission want to switch off a transponder before ramming his bird into the ocean? A transponder being switched off serves ONLY one probable motive. Whoever switched it off, did not want ground controllers to know where they were going, how high they were, how fast they were going etc.

I was disheartened when I saw international media which was so vehemently making an argument for more information just 3 days ago, conveniently align itself with the official statement from the Malaysian Government.

I’m sure most people who read this next part might think I’ve gone bizerk with my new found love for conspiracy. What choice do I have? Do you see the nonsense we are being fed? We all know how it works with the media nowadays. Terrorist attack happens, people die, media makes a noise, we all condemn the attack and a week later we are waiting for the next one to happen. But MH 370 is different. We DO NOT know what happened and I’m afraid nobody might every know.

My take? And this is just my opinion.

All that we are being fed is so absurd and so in-your-face kindergarten that I have to assume something sinister. I truly believe Malaysia 370 has been delivered to a rogue nation that is now refitting the jetliner to be a potential weapon. What we have is a jetliner that can travel very long distances and can conveniently do so without a transponder. Something called shadowing allows an aircraft to fly in proximity to another one thereby confusing ground radar. Who’s to stop somebody from strapping a tactical nuke (sometimes playfully called a briefcase nuke) to it?

I also believe one of the pilots was part of this plot. While looking through his computer, they found maps and pictures of, surprise, Diego Garcia, the Naval Base we spoke of earlier. That put together with the fact that it’s nearly impossible for a novice hijacker-cum-pilot to land a triple seven safely. I agree this is a grey area in this conspiracy theory, but it fits the design.

Furthermore, and this is the sad part, I do believe the crew and passengers have been kept alive, probably as a bargaining chip. If not, they’ve been executed.

Disclaimer: I am NOT saying this entire article makes sense, right out of the box. But ask yourself, after you’ve read this, does it not prove beyond reasonable doubt that it couldn’t have been a ‘crash’ or an incident of ‘pilot suicide.’

Either way, personally (and professionally), I’m not buying any of the ‘official stories.’